Tecplot 360 is a powerful visualization tool with the capability of line plotting, 2D and 3D surface plots, and 3D volumetric visualization. The data loader for Tecplot can read a variety of different files such as, HDF, HDF5, Excel, FEA files, and a general text loader. This tutorial will go through the process of generating plots using some of the previously mentioned file types and plot types.

For a Windows machine, Tecplot is started my simply running the executable. For a Linux machine, such as the ones at CAVS, Tecplot can be executed with the following commands:

For a general text file, the visualization is pretty straight forward. In this example, stress-strain data of a tensile simulation was output to a text file (stress-strain.txt). After starting Tec360, the welcome screen shown below appears, 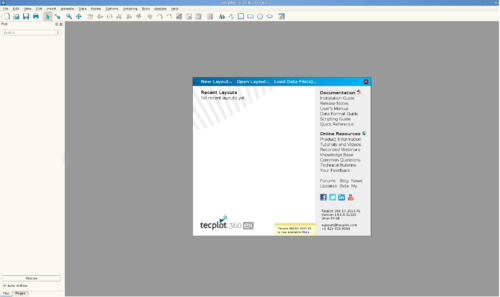