ORIGINAL PAGE AS OF 9 JUNE

A. Experimental effort at coupon level 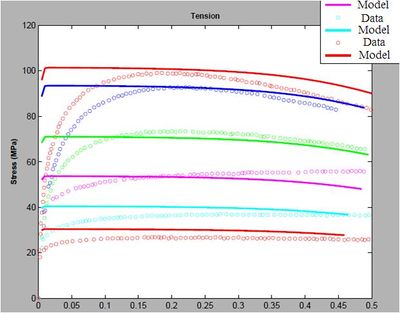 Experimental and predicted Stress-Strain curves for AM30

The above stress-strain data would be analyzed to form Hyperbolic Sine Material Model in Section B.

A laboratory-scale extrusion capability was developed at the Center for Advanced Vehicular Systems (Ms State U) to extrude billets of upto 1.5" length and 1.25" diameter using various die configurations ranging from simple circular solid profile to hollow pipe profile. An existing Instron 8850 test center was adapted for this purpose. Load at billet-die interface was recorded by a load cell while temperature on tooling components was measured by 4 K-type thermocouples - two each on sleeve and die.

A schematic of the fixture is shown below. 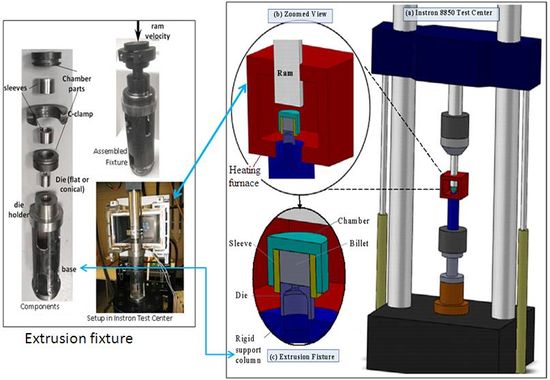 Schematic of the laboratory-scale extrusion fixture 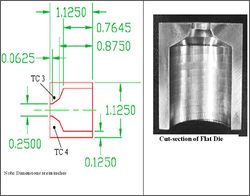 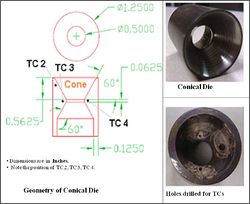 Test matrix for AZ61 and AM30 billets was as follows: 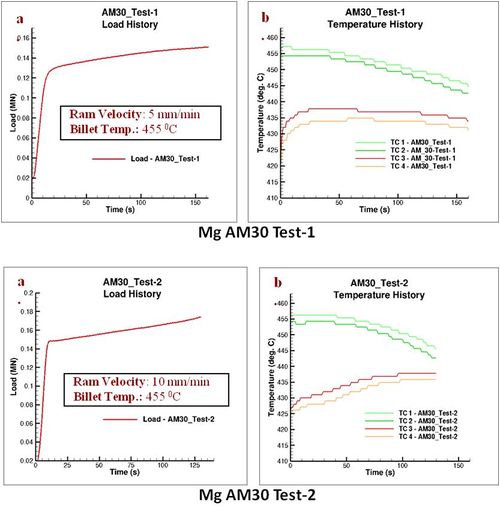 Experimental load and temperature history obtained from AM30 extrusion experiments 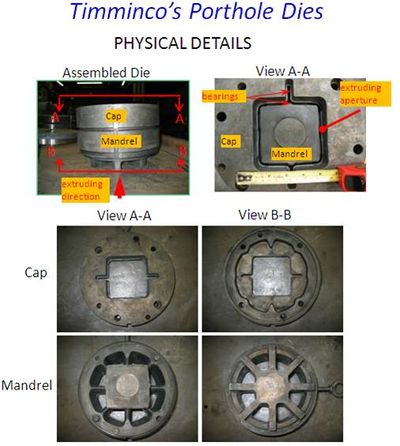 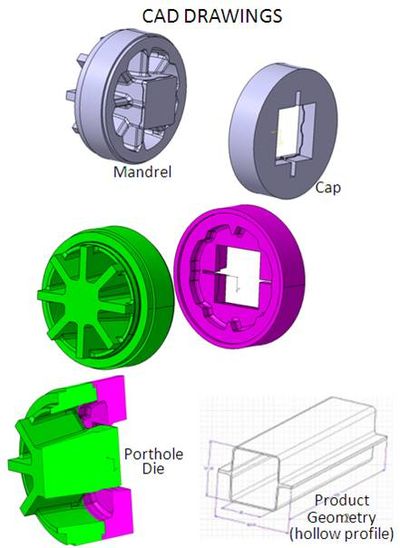 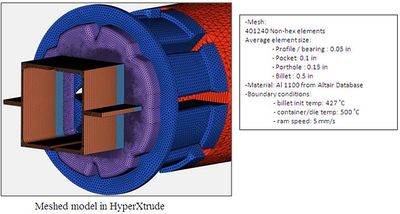 1. Hyperbolic Sine Material Model of AZ61:
Sine Hyperbolic Inverse law is among the material models implemented in HyperXtrude solver. It predicts a constant/ steady-state flow stress for various strain rates and temperature. Unless modified, this model does not account for strain-dependence and hence cannot predict stress softening. This law, by far, is the most widely used [McQueen et al] to describe thermo-viscoplastic behavior of metals during hot deformation and is written as follows:

2. HyperXtrude FEM
HyperXtrude is a commercial extrusion-dedicated simulation software developed by Altair Inc. to investigate die design and material flow in the extrusion process of metals and polymers. The purpose of this tool is to enable die designers and production engineers to accurately model the thermo-mechanical behavior of the billet material and thus validate die designs in early stages with the intention of reducing and/or eliminating costly die trials. Die trial is a prevalent practice in the industry which is marked by expensive time-consuming die iterations aimed at producing balanced material flow with minimum profile distortion.
HyperXtrude is a finite-element based code designed to model/simulate the non-isothermal material flow during metal extrusion. The code uses an Eulerian formulation of the fundamental differential equations that govern flow and heat transfer of non-Newtonian incompressible viscous fluids. As such, the code uses a fixed-space control volume representation of the problem domain through which the material flows as it is extruded through the tooling. Hence, the code does not capture the transient aspects (load and temperature) of the process as the material fills the die (pocket and bearing area). In this respect, HyperXtrude users need to set-up their simulation model to include the extended flow domain to represent the bearing area and profile. The problem setup procedure in HyperXtrude is illustrated below. 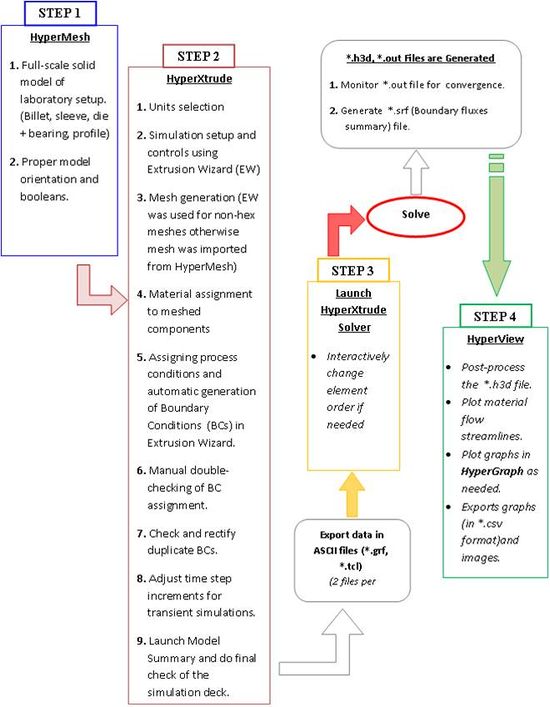 1. Extrusion Modeling to Validate Lab-Scale Extrusion
The figure below shows the 3-D model of flat-die experiments. The model consists of sleeve, die, billet, bearing and profile. For the purposes of saving simulation time and taking advantage of symmetry, a half model was simulated rather that a full 360-degree model. Nevertheless, for the sake of completeness, the results of both of these models were compared later; less than 1% difference in results was found with identical mesh size in both cases. 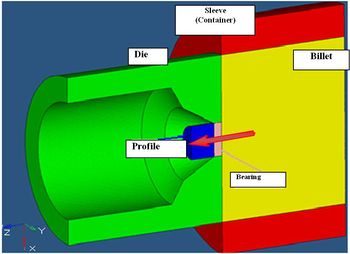 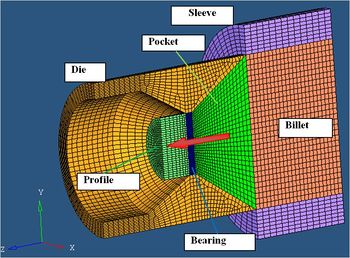 Process conditions are the initial conditions that are used in the computation and they were set corresponding to the experiments. The ram acceleration time in the simulation was set to the time that roughly corresponds to breakthrough load. Tooling and billet temperatures are specified along with butt length and ram velocity. In order to account for internal heat generation in the code, it is assumed that 90% of the work is converted into heat.

2. Validate load-displacement-temperature responses
The results of the simulation model were compared to experimental data. The correlation obtained is presented below. Note that TC1, TC2, TC3 and TC4 in the temperature plots refer to location of thermocouples in the experiments. One of the challenges was the determination of convection coefficients at the tool-work piece interfaces and determination of the right friction coefficient in bearing region. Friction is generally fine-tuned [Tekkaya et al] by “what-works-best” approach. Convection coefficient were zeroed on by following a ‘6-Step’ procedure developed during the course of the research.
[A.E. Tekkaya, P.A.F. Martins,(2009), Accuracy, reliability and validity of finite element analysis in metal forming: a user's perspective, Engineering Computations, Vol. 26 Iss: 8, pp.1026 – 1055] 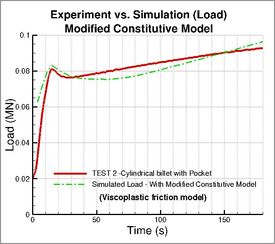 As seen above on the figure to the right, modification of the sine hyperbolic model enables the process model to capture the characteristic stress softening response owing to dynamic recrystallization in magnesium alloys. 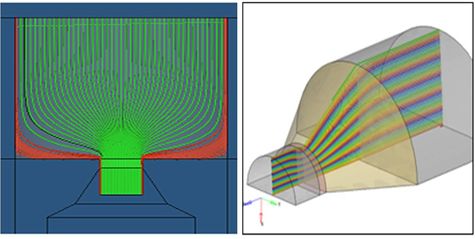 back to the ICME home