This is a quick tutorial to running a LAMMPS simulation on a Windows machine. For this simple example, the molecular simulation calculates the equilibrium lattice constant and corresponding cohesive energy for aluminum.

The general workflow for running molecular dynamics simulations using LAMMPS is illustrated in the figure below: 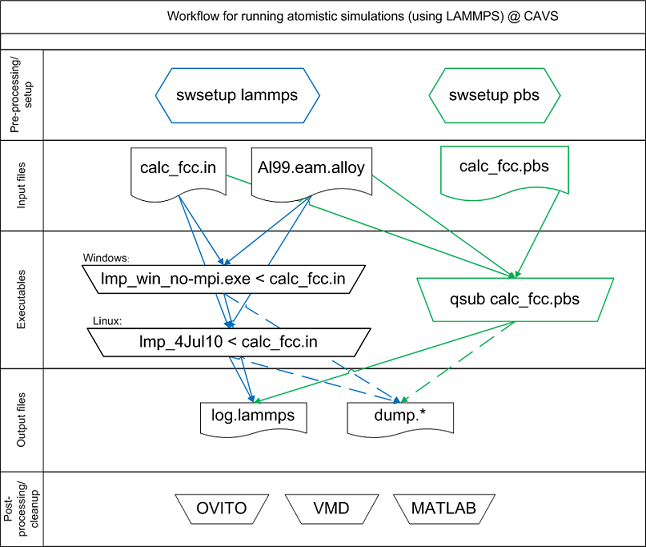 If you wish to run LAMMPS in a Unix shell, you must download a version on download webpage and compile and executable.

Voila! Easy as that.

Save this in the same directory as the LAMMPS executable.

This input script was run using the Jan 2010 version of LAMMPS. Changes in some commands may require revision of the input script. Copy the text below and paste it into a text file, 'calc_fcc.in'. Use the 'Paste Special' command with 'Unformatted Text'.

An alternative way to run this in Windows is to develop a *.bat file, which is a Windows executable file. For instance, create a new text file and change the extension from .txt to .bat. By double clicking on a *.bat file, you will execute the lines of scripts within the file. Now, don't double click to open, but rather right click and click on edit. Then enter the following lines:

Try it by dropping it in the same folder as the LAMMPS executable, input script, and potential file and double clicking... voila!

Run this using LAMMPS in UNIX

The end of the logfile/screen output should look like this:

In this section, we will break down what LAMMPS is doing for each step. The easy way to do this on your own is to consult the LAMMPS manual for each command or go to the Internet LAMMPS manual, i.e., at lammps.sandia.gov.

The '#' denotes a comment. Hence LAMMPS does not do anything for these lines.

The 'lattice' command specifies what type of lattice is used (fcc, bcc, hcp, etc.) and the number following this specifies the lattice constant. The 'region' command specifies the simulation cell. Here, we have used lattice units and specified that the simulation cell box is to be 1 lattice unit in each direction. The 'create_box' command following this will use the parameters outlined in the 'region' command to actually create the box. The 'replicate' command can be used to replicate the periodic cell in each direction.

The 'pair_style' command specifies what kind of interatomic potential will be used, while the 'pair_coeff' specifies the file that the pair potential coefficients are stored in. HINT: the potential extension can sometimes give a clue as to which format is being used.

The 'reset_timestep' does just that. The 'fix' command uses the 'box/relax' setting, whereby all directions ('iso') are relaxed to 0.0 Pa pressure for all atoms ('all'). The 'thermo' specifies the output during minimization. The 'thermo_style' specifies what type of output is shown to screen. The 'min_style' specifies that conjugate gradient will be used for minimization and the 'minimize' starts the minimization, i.e., the simulation cell boundaries are relaxed from the specified lattice constant (4 Angstroms) to the actual lattice constant (4.05 Angstroms).

This section defines some variables, such as 'natoms' for the number of atoms, 'teng' for the total potential energy, 'length' for the length of the simulation cell, and 'ecoh' for the cohesive energy of Al.

This section prints these values to screen and to the logfile. The '${}' is used to insert the variables defined earlier.

Q1: I typed in the above line and nothing happened.

Q2: I keep getting an error with the potential, i.e., potential file not found.