This example shows how to run an atomistic simulation to generate the generalized stacking fault (GSF) energy curve for FCC metals. This example uses a parallel molecular dynamics code, LAMMPS[1]. Excel is used to plot the energy-displacement and Ovito is used to visualize the simulation.

The generalized stacking fault energy curve is obtained by rigidly displacing two halves of a crystal on a (111) plane along a <112> direction in that plane. As the displacement proceeds, the energy of the crystal changes as the atoms slip by each other. The potential used here is the Mishin et al. (1999) aluninum potential.[2] This molecular dynamics simulation first generates a simulation cell with fcc atoms of orient [112] in the x, [-110] in the y, and [-1-11] in the z direction and a total of 6,995 atoms are created. The cell size will be 10 lattice units in the x and y directions and 40 lattice units in the z direction. Note that the units in the x and y direction are modified to reflect the different periodicit boundaries of the structure in the corresponding.The top half of the crystal is shifted in the xy plane along the x direction. With this scheme, the boundary conditions used are periodic, periodic and free surface in the x, y, and z directions, respectively. After the displacement in the x direction is made, the crystal is allowed to relax in the z direction and the energy is calculated and then dumped into the dump.comp.* file.

This input script was run using the December 21 2011 version of LAMMPS. Changes in some commands in more recent versions may require revision of the input script. To run this script, store it in "in.stack_fault.txt" and then use the "lmp_win_no-mpi.exe < in.stack_fault.txt" in a Windows environment where "lmp_win_no-mpi.exe" refers to the LAMMPS executable. 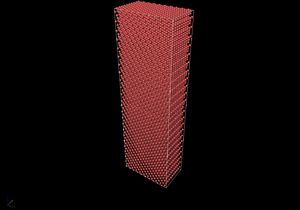 This is a persective view of the simulation cell with atoms.

The simulation can be visualized using Ovito[3] To do so, open the Ovito program and select the import data tab. Now go to the directory in which you ran the simulation. Locate the first dumpfile, which would be dump.comp.0 in this case, that results from the simulation. Select open and on the next page choose the option to use the wild card name, dump.comp*, to load all the dump files. Then choose auto-assign columns and select OK. Use the play, forward and backward skip button located at the bottom of the program to view the different snapshots.

Go to the next tutorial.

The author and first advisor would like to acknowledge the support to this work by the National Science Foundation, HBCUUP-RIA program, Program Manager Dr. Claudia Rankins, Award No. HRD-1137587. Additionally, the technical and logistical support of CAVS and HPC2 of Mississippi State University is acknowledged

The corresponding author author would like to acknowledge funding for the overarching EVOWiki project through the Department of Energy.