Structure observations on the turtle shell revealed a multiphase composite material that is arranged by a multiscale hierarchy. Such a multiscale hierarchical structure of the turtle shell carapace is depicted in Fig. 1. The turtle shell comprises a series of connected individual plates covered with a layer of horny keratinized scutes (Fig. 1a–b). The scutes are made up of a fibrous protein called keratin that also comprises the scales of other reptiles. These scutes overlap the seams between the shell bones and serve to reinforce the overall protection to the shell. The carapace is made of a sandwich composite structure of functionally graded material (FGM) having relatively denser exterior layers and an interior fibrous foam-like layer (Fig. 1c–d). SEM micrographs clearly revealed such fibrous structure inside of the cell (Fig. 1e–f). 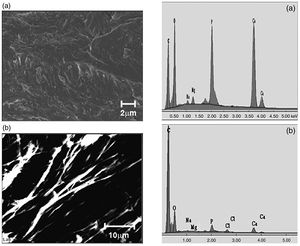 For quasi-static compression tests, two different types of coupon specimens including all three layers and then only a bony exterior layer were prepared. The effect of strain rate on the mechanical behavior of the turtle shell was compared with respect to the different density levels and the raw data obtained from the tests is illustrated in Fig. 8a. The lower five curves (represented by lines with symbols) were obtained from the test specimens including all three layers (two exterior and an interior layers); whereas the upper six curves were obtained from the specimens only containing a relatively denser exterior layer. Top three curves (in symbols) among those six curves were obtained from thinner specimens and the bottom three curves (in lines) represent thicker specimens. The thickness difference between those two regimes was about 15%. The favorable deformation mechanism of the turtle shell carapace under quasi-static compression test conditions can be explained by importing that of synthetic foams and/or honeycombs since fundamental structures of the test specimens are similar to those of such cellular solids. At small strains, the specimens were deformed in a linear elastic manner due to the cell wall bending. Soon after the initial linear elastic deformation, a plateau of deformation was reached, because of the buckling of the cell walls. After such a plateau of deformation, another period of linear deformation was proceeded since a densification occurred resulting in a rapid increase of compressive stress. When comparing the specimens containing the exterior region only, the thicker specimens showed a similar deformation yet much weaker behavior than those can be observed in the specimens including all three layers; whereas the thinner specimens showed almost a linear compressive deformation behavior simply because of the density and structure differences. Most of discernible pores within exterior layer are distributed near the region between the exterior layer and interior foam-like layer. Fig. 8b provides the comparison of specific energy absorption obtained from the quasi-static compression test results (Fig. 8a). Density and porosity levels of the test specimens were already considered in this normalized data. The energy absorption ability of the turtle shell carapace increased with increasing strain rate for a given density level. The composite layers including all three layers showed better energy absorption ability compared to the exterior layer for any given strain rate. In addition, such composite layers possessed a considerable amount of plateau of deformation that is a model index of good energy absorbing materials. The combining information of these two plots in Fig. 8 is very important to design the optimum energy absorbing composite material. For example, composite foam materials can be tailored to give the best combination of properties for a given package by choosing the right combination of the cell wall materials, relative density, reinforcement phases, and so on.