This paper presents a computational study to examine lateral impact behavior of pressurized pipelines and to determine influence of internal pressure on the pipelines on their impact behaviors. A total of more than 72 numerical simulations were carried out on mild steel pipe models with different internal pressure levels and were struck at the mid-span and at the one quarter span positions. These numerical simulations of the impact tests were performed using 3D dynamic nonlinear finite element analysis (FEA) through LS-DYNA, where both geometrical and material nonlinearities were considered. The computational results for the first time systematically revealed the effects of internal pressure, impact position, and outside diameter on the lateral impact behavior of the pipeline models. The outcomes of this study will have potential benefits on research of safety and reliability of civil pipelines and development of advanced pipeline materials

Dynamic responses and failure modes of pipelines subjected to low-velocity lateral impact were studied and described by Jones and other researchers through a series of experimental and theoretical analyses. In Jones’ work[1] pipelines with different sizes were fully clamped at both ends and a rigid indenter struck transversely at the pipe center, quarter span and near to the support at velocities ranging up to 14 m/s. Important experimental results (deformation mode, maximum permanent transverse displacement, threshold failure energy, etc.) were observed and associated with size of the pipelines, initial kinetic energy of the indenter, its impact velocity, and its impact position. In addition, properties of material of the pipelines were also considered and the influences of material strain hardening, strain rate sensitivity, and elasticity on the impact behavior of the pipelines were included in their analytical models. Pressurized pipelines were also tested in Jones’ and Ng’s work [2] but the influence of internal pressure on the impact behavior of the pipelines has not been explicitly demonstrated. In reality, the internal pressure is a critical factor in the design and assessment of pipelines because in civil applications, most pipelines convey gases and liquids under high pressures over long distances. In this study, the dynamic inelastic behavior of clamped thin-walled pipes with internal pressure impacted transversely by a rigid, knife-edge indenter at the pipe center and quarter span is modeled and examined computationally through more than 300 simulations. The obtained numerical results are validated by comparing to several previously published experimental data. Effects of internal pressure on the lateral impact response of the pipelines as well as influences of other impact conditions such as dimensions of the pipelines and impact location are revealed from those simulation results. An explicit FEA solver, LS-DYNA is employed to create the FEA models and run the numerical analyses. The rest of this paper is organized as follows: section 2 describes the impact problem investigated in this study; section 3 introduces material properties of the pressurized pipelines; section 4 demonstrates computational modeling techniques employed in this study; important numerical results are presented in section 5 and discussed in section 6; section 7 concludes this paper. 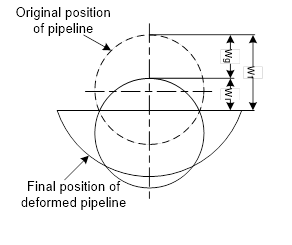 Figure 1:Wf, Wl, and Wg for the idealized deformed cross-section of a pipeline.

The indenter geometry is selected as a fairly severe test of a pipeline and is an idealization of the edge of a flange which could be dropped accidentally onto a pipeline. The pressurized pipes are made from seamless cold drawn mild steel with outside diameters of 22, 42, 60, 80, 100, and 120 mm with a fixed ratio of 2L/D = 10, where 2L is the distance between the two supports and D is the outside diameter. The selected ratio of 2L/D = 10 is currently being used in most research laboratory and industry plant as the largest unsupported pipe length ratio[4]. The cold worked mild steel pipes have a 2mm wall thickness, and the mechanical properties in the axial direction of the pipe are: static uniaxial yield stress σy = 663 MPa, static ultimate tensile stress σu = 823 MPa, and static uniaxial rupture strain εr = 6 ~ 7%. Several internal pressures will be applied in addition to the tests without any internal pressure in order to find out the influence of internal pressure on the lateral impact behavior of the pipelines. In this study, the internal pressure p varies from 0 to 150 bar. Specifically, 6 different pressures, 0, 30, 60, 90, 120, 150 bar are applied on inner surface of the pipelines separately in order to achieve a complete understanding of how the internal pressure affects the lateral impact behavior of the pipelines. After simulations, important numerical data are measured or estimated in order to describe the plasticity mechanisms and impact behavior of the pressurized pipelines. Those data include Wf, the maximum permanent transverse displacement, Wl and Wg, local and global permanent transvers displacement respectively, maximum impact force Fmax and average impact force Fm, rebound velocity of the striker when it separates from the pipe vr, impact energy absorbed by the pipes Ep and the threshold failure energy Ef, etc. Fig. 1 defines Wf, Wl and Wg, from which the relationships among the three displacement components can be defined as:

In creating FEA models used for impact analysis that involves large strain and high strain rate problems, the material properties have to be carefully defined to correctly capture the impact. Here, elastic plastic material law with kinematic isotropic hardening is chosen to model the pipeline material (cold drawn steel). Dynamic effects of strain rates are taken into account by scaling static yield stress with a factor with the assumption of Cowper-Symonds relation [5].

The pipelines are made of cold drawn steel, whose material properties are listed in Table 1 and were implemented into the FEA models through the card *MAT_PLASTIC_KINEMATIC. The indenter is assumed to be rigid during the impact simulation and was defined using *MAT_RIGID. 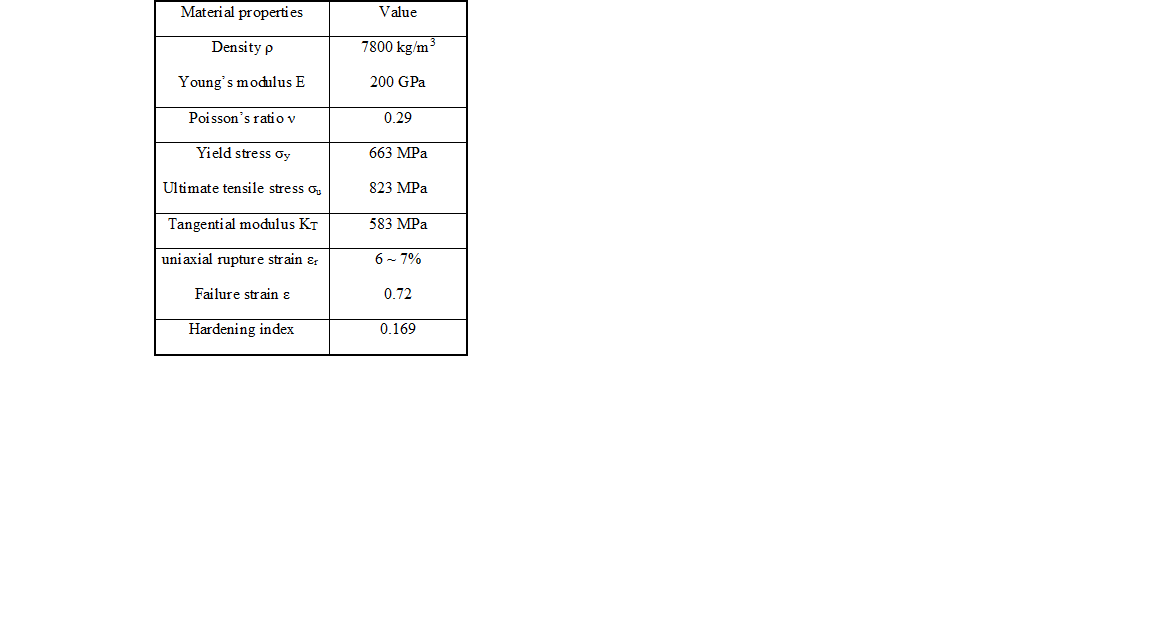 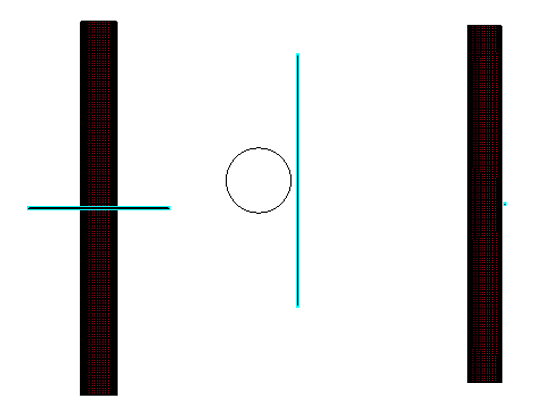 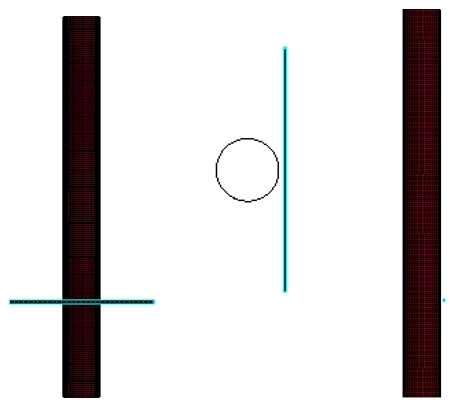 Figure 4: FEA model showing an indenter impacts on one quarter of a pressurized pipeline 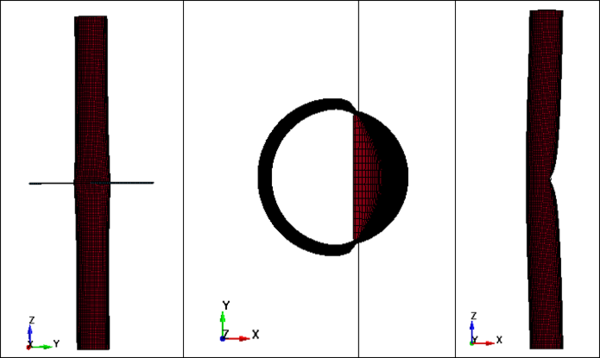 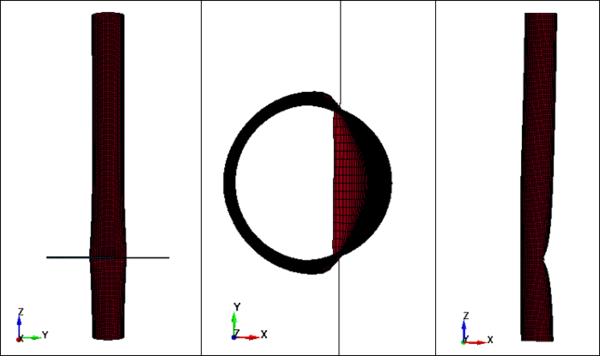 After the impact simulations, important FEA results were collected and compared, from which typical lateral impact response of the pressurized pipelines would be described. Figs. 5 and 6, for example, plot the deformed configurations of the FEA models presented in Figs. 3 and 4, respectively. Some significant FEA results are recorded in Tables 2 and 3 for pipeline models which were struck at middle and one quarter span position, respectively.

Some of the listed FEA results obtained from this study were compared with several previously published experimental results [8, 9] and a good agreement was achieved. Thus, the accuracy of the developed FEA models and proposed computational approach was validated.

[edit] Table 2:FEA results for the pipes struck at the middle position 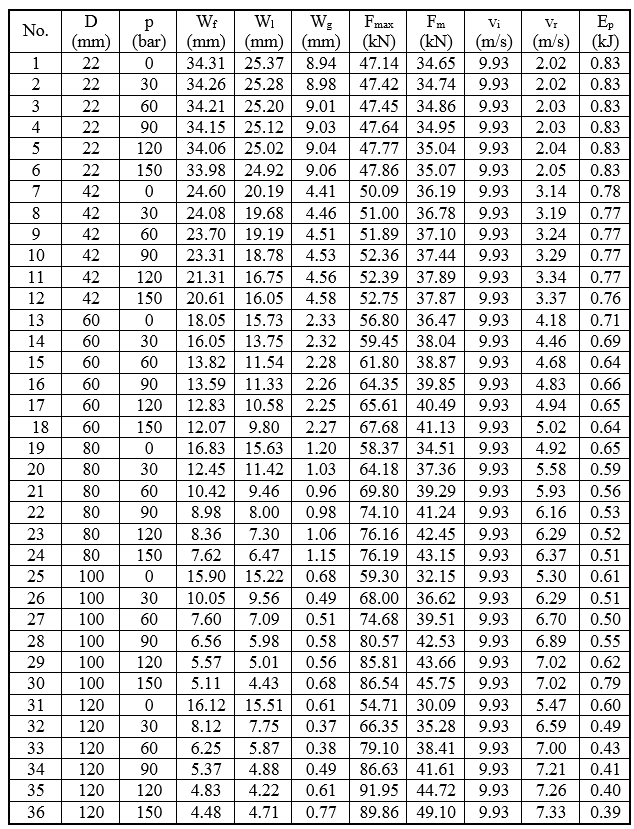 [edit] Table 3:FEA results for the pipes struck at one quarter span position 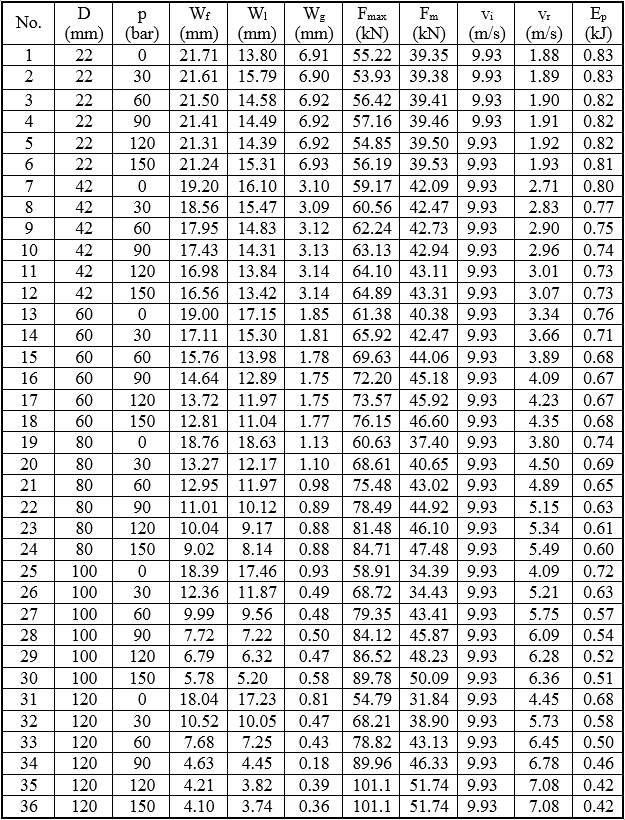 [edit] Effects of impact position on the impact response of pipelines

Figure 10: Comparison of impact force yielded from models presented in Figs. 3 and 4

Figure 12: Comparison of deformation yielded from models presented in Figs. 3 and 4

Figure 14: Comparison of absorbed energy yielded from models presented in Figs. 3 and 4

In order to better reveal the influence of impact position on the lateral impact behavior of the pipelines, six response surfaces are plotted based on results listed in Tables 1 and 2 and displayed in Figs. 9 to 11. In those displayed response surfaces, outside diameter and internal pressure are set as two input variables and the output result is maximum impact force, maximum deformation, and maximum absorbed energy, separately. Figs. 9a and 9b compare the maximum impact force of the pipeline models struck at its center and at its one quarter span. Figs. 10a and 10b compare the maximum deformation, and Figs. 11a and 11b compare the maximum absorbed energy. 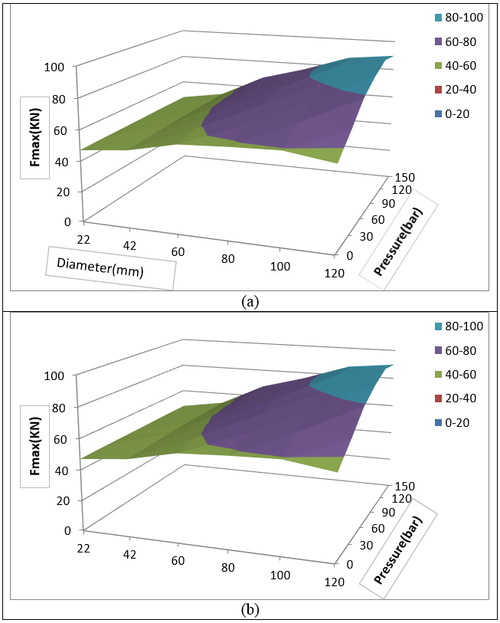 Figure 15: Maximum impact force for different impact position at (a) center (b) one quarter 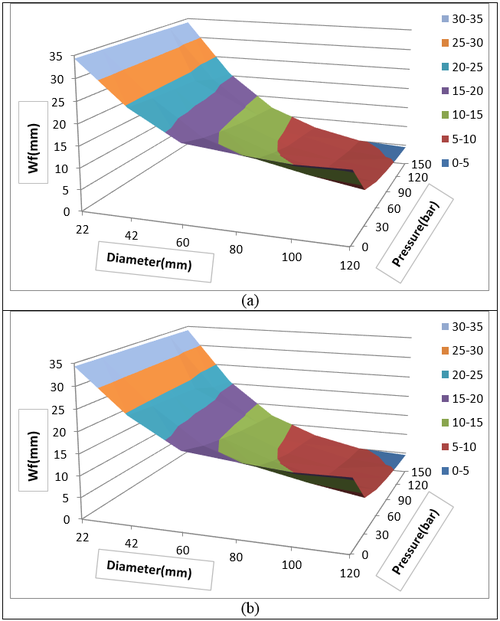 Figure 16: Maximum deformation for different impact position at (a) center (b) one quarter 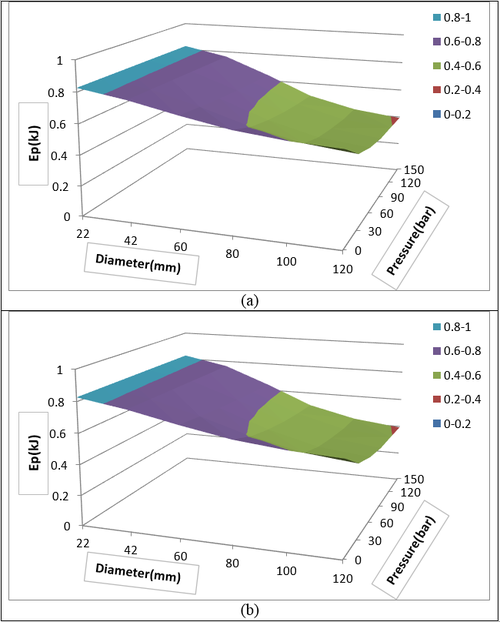 Figure 17: Maximum absorbed energy for different impact position at (a) center (b) one quarter

[edit] Effects of internal pressure on the impact response of pipelines

The effects of internal pressure on lateral impact behavior of the pipelines are inspected based on Figs 18 to 23. 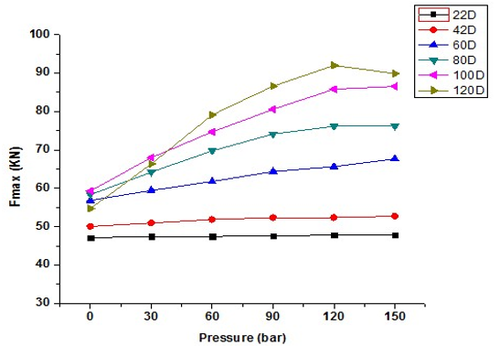 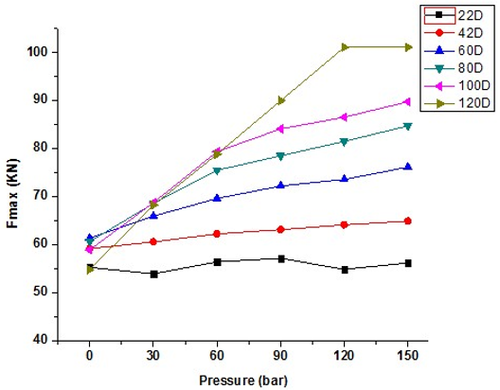 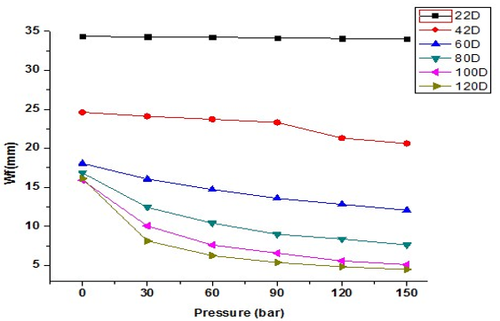 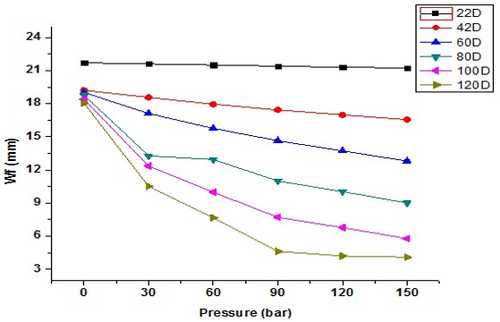 Figure 21: Maximum deformation of pipeline models struck at one quarter 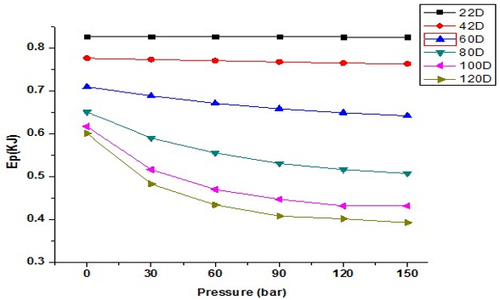 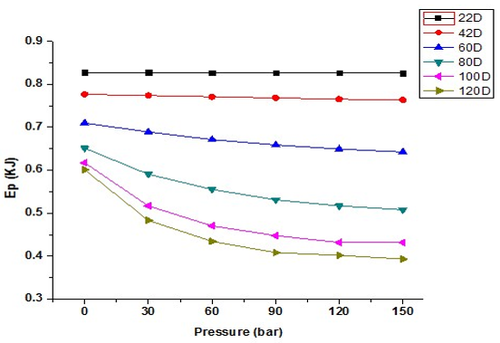 From Figs. 12 to 23 it can be observed that the different impact positions did not evidently alter the characteristic lateral impact response of the pressurized pipelines. The response surfaces of maximum impact force, displacement, and absorbed energy obtained from both impact scenarios showed similar shapes (Figs. 15 to 17). The influences of internal pressure and diameter on the impact response of those pipelines also rendered similar tendencies under both mid-position impact and one quarter-position impact (Figs. 18 to 123). However, different impact positions did affect the values of maximum impact force, transverse displacement, and absorbed energy. Figs 12 and 13 argue that the maximum impact forces yielded during the one quarter-position impact were apparently higher than those generated during the mid-position impact. This is because that the “one quarter position” is closer to fixture and therefore is more rigid than the “middle position”. Due to the same reason, the permanent transverse displacements yielded from the one quarter-position impact were significantly lower than those resulted from the mid-position impact (as shown in Figs. 14 and 15), which can also be well explained through the classic cantilever beam theory. However, as reflected from Figs. 16 and 17, the impact energy absorbed during the mid-position impact was slightly lower than that absorbed during the one quarter-position impact. Those computational findings agree well with the phenomena observed experimentally by Jones and his coworkers [1-3]. As for the influences of the internal pressure and outside diameter, Figs. 12 and 13 reveal that when the internal pressure increased, the maximum impact force also increased, even such tendency was not apparent when the out diameter was low. It is believed that the internal pressure will enhance impact resistance of the pipeline model, therefore leads to higher impact forces. Meanwhile, those figures also tell us that under the same pressure, the pipeline models with larger outside diameter may be subjected to higher impact force. From Figs. 14 and 15 it is found that the maximum transverse displacement decreased with an increasing internal pressure. Similar to the maximum impact force, such tendency was not clear when the outside diameter was low. This phenomenon can also be explained through the improved impact resistance of the pipelines due to the increased internal pressure. On the other side, the total permanent transverse displacement Wf decreased when the outside diameter D increased. However, on inspecting the results listed in Tables 1 and 2, it can be seen that the permanent local displacement Wl did increase as the outside diameter increased, which can be perfectly explained using the theoretical model produced by Oliveira et al.[6] [13]. Figs. 16 and 17 show that when the internal pressure increased, the impact energy absorbed by the pipelines decreased (still, such tendency was not that evident for pipelines with a small outside diameter). Similar finding was also reported in Ng and Shen’s work, which were obtained through experiments [8]. Since the internal pressure enhances the rigidity of the pipeline, that way the indenter will rebound at a comparatively high speed after impacting the pipeline and less impact energy will be absorbed by the pipeline. Meanwhile, from both figures it is observed that similar to the displacement case, the absorbed impact energy decreased when the outside diameter increased.