Movie capturing high strain rate deformation of polycarbonate (experiment). Shown as a difference image between successive frames, so movement triggers an intensity other than gray. Experiments are used to validate macroscale models. 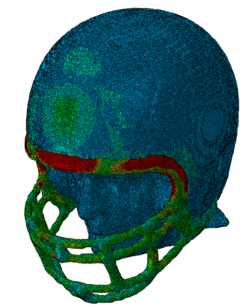 The key to structural scale applications is employing the "best" numerical method for the application. Typically, for solid mechanics, finite element methods are employed and used mostly for the engineering applications described in this CyberInfrastructure.

Below are several codes that are used for simulating events at the Structural Scale.

Example of the SWEEP Meshing Method on a Cylinder

Note: The meshing technique shown in this tutorial is better than the mesh automatically generated and should provide good uniform results for the stresses on the outside of the cylinder. However, the elements at the center of the cylinder will still be distorted and could provide bad data for the stresses at that location. A better method for providing a uniform mesh over the entire geometry of the cylinder is the SWEEP method, show in the image to the right. The SWEEP method, is pretty simple, instead of having a circular section in the middle of the cylinder, make it a square. Then, cut the cylinder into quarters length wise (similar to what was shown in the video) such that the quarter cuts go through the corners of the middle square. If the size of the mesh is seeded appropriately, the results are a perfectly uniform mesh in the center and a nice uniform mesh outside of that with minimal distortion at the corners of the squares.

This is a rather useful library of all of the required numerics if you wish to implement your own solver for finite element analysis. It has all fo the basis functions for linear, quadratic, and cubic serendipity elements in both 2D and 3D, as well as code for generating stable high order elements in any dimension and code for making 4D Lagrangian elements for those interested in general relativity calculations. Found at: DIY-FEA

The structural scale information essentially requires the constitutive model that is received from the macroscale. Although common practice finite element analysis does not include heterogeneities from microstructures, defects, and inclusions within the mesh related to the constitutive model, the MSU plasticity-damage 1.0 model allows the incorporation of such materials science information. The quantities that can be included in this version of the constitutive model are the grain size, particle size and volume fraction of particles, pore size and volume fraction or pores (porosity level), nearest neighbor distances of pores and particles. Hence, each element in the finite element mesh would have a different value for each of the quantities and hence the strength and ductility of the material in those domains. Several examples that show that by not using the heterogenous distributions of microstructures, defects, and inclusions include the redesign of a Cadillac control arm [2], the Corvette engine cradle [3], and a powder metal steel engine bearing cap [4].

Some examples of using different finite element simulations with associated input decks using our MSU plasticity-damage 1.0 can be garnered from the following locations:

This category has the following 4 subcategories, out of 4 total.

The following 21 pages are in this category, out of 21 total.