This study offers a novel research approach to compare weld quality for different welding conditions in order to achieve optimal end-product results. Using electron back scatter diffraction (EBSD) scanning, tensile testing, and laser beam profilometry (LBP) measurements along with optical microscopy (OM) images, failure loads and deformation of 6061-T6 aluminum alloy, resistance spot welded (RSW) joints were experimentally investigated. Three welding conditions, nugget and microstructure characteristics were quantified according to predefined process parameters. Quasi-static tensile tests were used to characterize the failure loads in specimens based upon these same process parameters. Profilometer results showed that the larger the applied welding current, the deeper the weld imprints. In addition, good correlation was obtained between the EBSD scans and the welding conditions. A strong dependency was found between the grain size and orientation and the welding parameters. Manufacturing industries currently seek to better understand the complicated microstructural changes that occur in crystalline materials during welding operations. These welding operations often involve high strains and deformation temperatures that result in microstructures which continually evolve away from that of the base material. A non-homogeneous distribution of the material microstructure often exists due to the non-uniform distribution of temperatures and strains inherent during most joining operations, such as resistance spot welding (RSW). The residual microstructures present in crystalline materials post-welding influence the overall strength and performance of the manufactured components. Therefore, understanding the influence of welding process parameters, such as force, weld time, and current, on microstructural changes provides manufacturers with opportunities to optimize the welding processes in order to achieve the most desirable material properties and microstructures for their endproducts. Concurrent to manufacturing industries’ efforts to optimize welding processes, transportation industries seek to address energy and emission concerns through wide-spread use of lightweight metals like aluminum alloys to decrease the weight of the vehicles they produce.

This study reveals that the welding process parameters have a great influence in the quality of the RSW joints. With successive iterations and collected ‘‘witness samples’’, the optimum current, force and time for resistance spot welding 6060-T6 aluminum alloy were determined. Profilometer results clearly indicate that the larger the current, the deeper the weld imprints. As expected, the optimum quality of weld is at ‘‘nominal’’ condition. By slightly changing the process parameters from nominal, the profile appearances for the top and bottom of the produced welds are less than acceptable. Furthermore, it was found that the depth of the top part of the resistant spot welds varies linearly with respect to the applied electric current. Based on the quasi-static tests, we can conclude that if the welding parameters are correctly established, consistency in static failure loads is achieved. As such, good correlation between the EBSD scans and the welding conditions were observed. The EBSD scans for welds show the strong dependency between the grain sizes and orientation function on the process parameters. Lower heat input created random microstructure and weaker welds, while the ‘‘nominal’’ and ‘‘high’’ conditions produced smooth transitions between the welding zones and larger failure loads. High values for the standard deviation in the ‘‘low’’ condition case indicate insufficient electric current and energy input to produce satisfactory welds.[1] [2]

The fatigue behavior of Resistance Spot Welding (RSW) in aluminum 6061-T6 alloy (AlMg1SiCu per International Standard Office nomenclature) was experimentally investigated. Three welding conditions, denoted as “nominal,” low” and “high,” were studied to determine the microstructure of the weld nuggets. The process optimization included consideration of the forces, currents and times for main weld and post-heating. By successive iterations and “witness samples” collected, the optimum welding parameters were determined. Load control cyclic tests were then conducted on single weld lap-shear joint coupons to study the microstructure and fatigue life properties. These tests were used to characterize the fatigue behavior in spot welded specimens to elucidate the influence of the process parameters. This work revealed that the welding process parameters have a great influence in the microstructure and fatigue life of the 2 mm-thick aluminum sheet resistance spot welded joints. Different fatigue failure modes were observed at several load ranges and ratios for a constant frequency and three welding currents. 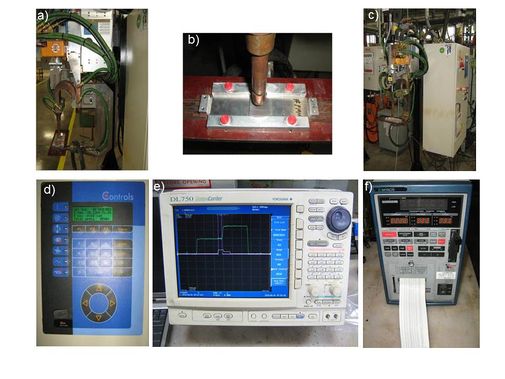 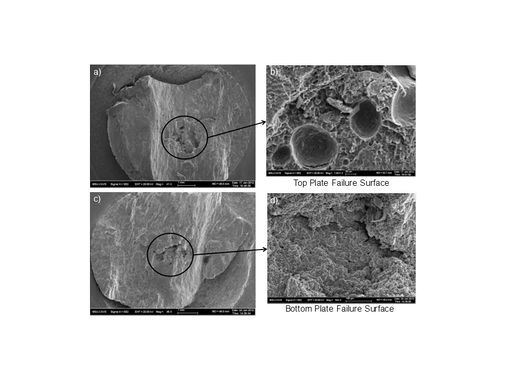 Figure 3: Scanning Electron Microscopy showing top and bottom of weld #36 for “nominal” condition. The failure occurred as an interfacial mode. 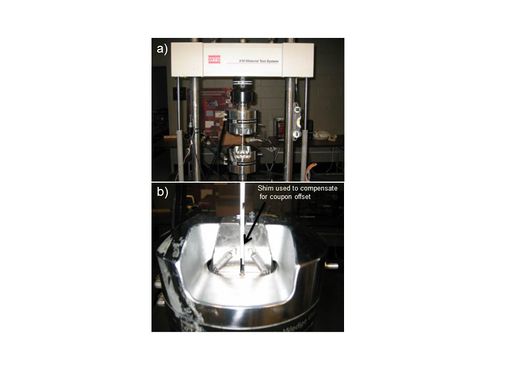 Figure 2: (a) A servo-hydraulic load frame shown with the resistance spot weld coupons tested under cyclic loading conditions. (b) A magnified view of the lower grips of the RSW test setup illustrating the use of the shim to compensate for specimen offset. A 2 mm thick shim made by same material was installed on the lower grip, as indicated. An identical sized shim was also used in the upper grip (not shown).

Experiments revealed that the welding process parameters have a great influence upon the quality of the RSW of aluminum 6061-T6 alloy. From successive iterations and “witness samples” collected, the optimum current, force and welding time were determined. Process sensitivity was studied and summarized. The MIL-W-6858D Military Specification was met or exceeded for “nominal” and “high” welding conditions. Fatigue S-N curves is novel for this research field and was used to characterize mechanical behavior for a 6061-T6 aluminum alloy welding joint at coupon level. The numbers of cycles to complete failure of a 2 mm lap joint were consistent at the same loading forces and ratios. Fatigue failure modes were the same when the loading conditions remained constant, but these modes changed significantly when the forces and loading ratios were changed. The welding current had a large influence on welding nugget dimensions and lap joint mechanical behavior. On “low” welding condition the fatigue life was decreased by an order of magnitude, which is a dramatic change in mechanical properties under cycling loading. The number of cycles to failure ranged from approximate 6,000 to 2,000,000 cycles. No fatigue initiation sites were observed in the porous area formed from rapid solidification in the center of the welds. All four fatigue initiation sites were experienced at the outside in the welding button. Very visible striations next to the crack initiation sites were observed on this study. Brittle failure occurred through the center of the weld area at the end of specimen life. The reported results are unique for aluminum resistance spot welded joints and have value for both academia and industry. American Welding Society and Military standards can use data obtained from this study to extend the data base of 6061-T6 aluminum alloy resistance spot welding. The authors are currently studying the influence of corrosive environments on RSW fatigue life. In the future, we plan to develop FEA simulation incorporating a coupled thermal-electrical-mechanical process (a model was created and preliminary results were obtained) in order to further investigate the effect of process parameters on the weld quality. [3] [4]

Residual strains of resistance spot welded joints of 6061-T6 aluminum alloy sheets were measured in three different directions denoted as in-plane longitudinal ( ), in-plane transversal ( ), and normal ( ). The welding process parameters were established to meet or exceed MIL-W-6858D specifications (i.e., approximately 5.7 mm weld nugget and minimum shearing force of 3.8 kN per weld confirmed via quasi-static tensile testing). Electron backscatter diffraction (EBSD) and optical microscopy (OM) were performed to determine grain size and orientation. The residual stress measurements were taken at a series of points along the weld centerline at depths corresponding to the weld mid-plane and at both 1 mm below the top surface of the plate and 1 mm above bottom surface. The residual stresses were captured on the fusion zone (FZ), heat affected zone (HAZ) and base metal (BM) of the resistance spot welded joint. Neutron diffraction results show residual stresses in the weld are approximately 40% lower than yield strength of the parent material. The maximum variation in residual stresses occurs, as expected, in the vertical position of the specimen because of the orientation of electrode clamping forces that produce a non-uniform solidification pattern. Despite the high anisotropy of the welding nugget and surrounding area, a significant result is that measured stress values are negligible in both the horizontal and vertical directions of the specimen. Consequently, microstructure-property relationships characterized here can indeed inform continuum material models for application in multiscale models. 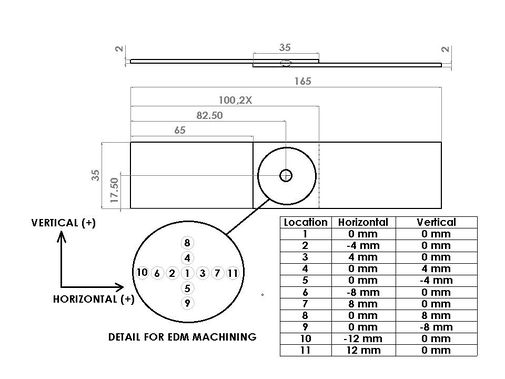 Figure 1: Geometry of Al 6061-T6 resistance spot welded lap-shear coupon. Welding parameters were adjusted to achieve desired process quality. The horizontal axis corresponds to the rolling direction along the welded plate, while the vertical axis is against rolling direction. Dimensions are in millimeters. 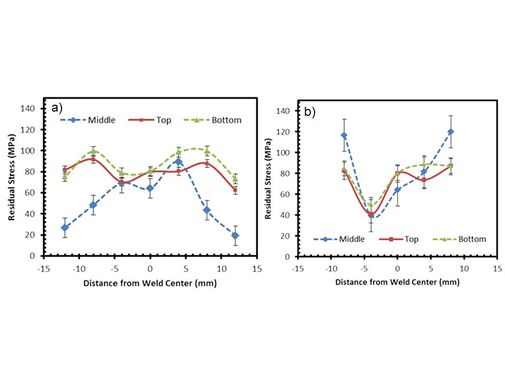 Figure 3: von Mises stress measurements in (a) horizontal direction of the welded plate and (b) vertical direction. This figure illustrates “in-depth” residual stresses for the three sets of thicknesses measured as follows: in the center section of the welded joint (middle), 1 mm up (top), and 1 mm down (bottom) w. r. t. the mid-plane. Total thickness of the specimen is 4 mm, and the origin of the coordinate system is in the center of the weld. 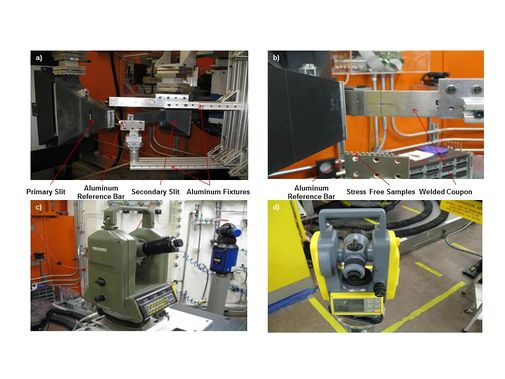 The welding process parameters were correctly determined to meet MIL-W-6858D specifications, and the minimum shearing force of 3.8 kN was confirmed via quasi-static tensile testing. Microstructure (EBSD and OM) and neutron diffraction measurements were performed to characterize the microstructure-property relationship of resistance spot welded Al6061-T6 aluminum alloy joints. The EBSD and OM scans for welds show the grain size and orientation for the fusion zone, heat affected zone, and base metal. The above results were used to create a strong foundation for residual stress measurements of an acceptable resistance spot welded joint in compliance with mentioned specifications. The neutron diffraction residual stress (NDRS) measurements were successfully accomplished. The values of stresses did not exceed 120 MPa, which is less than half of 6061-T6 aluminum yield stress. It is significant to note that there were no significant values for residual stresses in the normal component (plain stress condition at the surface) and little variation in through thickness. Therefore, this stress component is not an engineering concern. This result is important because NDRS is a limited access, cost prohibitive, non-destructive technique which provides information about all three stresses. Although few, if any other techniques can determine , for this resistance spot welding application, only in-plane stress components ( ) are significant. Thus, these stress components can be measured by alternate, less expensive techniques such as X-ray diffraction. No shear stresses were measured in this study. We summarize that measurements of three-dimensional residual stresses in aluminum 6061-T6 resistance spot welded joints were performed. These reported results are unique for aluminum resistance spot welded joints due to the method used to determine bulk (“in-depth”) residual stresses. Being negligible, stress can be disregarded in weld joint design. The results are indeed valuable to both industry and academia. [5]

The following 2 pages are in this category, out of 2 total.