4. Fatigue Tests and Predictions of the Shock Tower

In this section are presented the results of fatigue tests on the selected shock tower component.. The objective of this task was to evaluate the performance of the shock tower under real loading conditions. In addition, the effectiveness of the MSF model was assessed. Finally, predictions of the MSF along with the finite element simulations are contrasted to the fatigue results.

The failure location for the first fatigued shock tower is shown in figure 20. The crack initiation point was located approximately 22 mm from the triple intersection of the edges which is indicated within the red box in Figure 20. After some crack development was allowed the test was stopped. Similar results were observed for second tested shock tower, with almost the same place for the fault location. 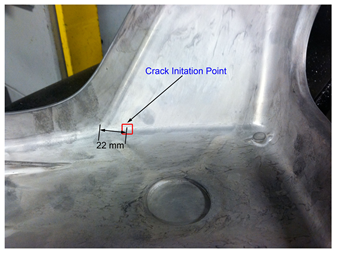 Finite element simulations of the shock tower were conducted to predict fatigue failure and failure location for the component. An internal state variable (ISV) material model based upon a multi-scale modeling was employed to predict the monotonic behavior of the component. Then the MSF model was incorporated to compute the estimated life of the component. In practice mechanical designers in the industry apply two methods to predict failure of a mechanical component or a structure, stress analysis or material science approach. In this analysis when a stress analysis point of view was employed failure location is determined to occur at point C. That is, from the FE simulations Point C resulted with the highest Mises stress. On the contrary if the materials science approach was used the failure is located at point B since at point B was observed the highest level of porosity. Figure 22 shows the four locations A, B, C and D where point D represents a point with average property values. In Figure 22 point A is shown in this view for purpose of a better illustration and comparison. 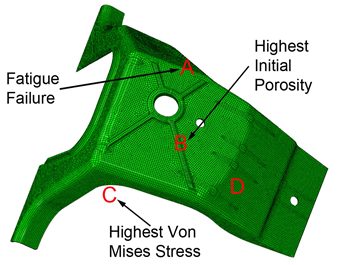 Table 6 shows a classification of locations A, B, C, and D according to the approach employed. These results clearly show that depending on the approach used the answer will vary significantly. The material science point of view assumes that the failure location will be at a location with the highest porosity, and hence conclude that failure will occur at point B. By the other hand a FEA of the component will provide the stress distribution and will lead to conclude that the failure location will be at a point with the highest Mises stress, point C. Neither, point B or C was observed to be the fatigue failure location instead failure occurred at point A. However, the ISV-MSF tool which incorporates material models based on mechanical and microstructural properties was able to predict failure location. The MSF model predicted the lowest fatigue lives at region A.

Table 6. Locations of interest for the shock tower.