Sheet metal is metal formed by an industrial process into thin, flat pieces. It is one of the fundamental forms used in metalworking and it can be cut and bent into a variety of shapes. Countless everyday objects are constructed with sheet metal. Thicknesses can vary significantly; extremely thin thicknesses are considered foil or Metal leaf, and pieces thicker than 6 mm (0.25 in) are considered Structural steel plate.

Sheet metal is available in flat pieces or coiled strips. The coils are formed by running a continuous sheet of metal through a roll slitting roll slitter.

The thickness of sheet metal is commonly specified by a traditional, non-linear measure known as its Sheet metal gauge. The larger the gauge number, the thinner the metal. Commonly used steel sheet metal ranges from 30 gauge to about 8 gauge. Gauge differs between ferrous Iron(iron based) metals and nonferrous metals such as aluminum or copper; copper thickness, for example is measured in ounces (and represents the thickness of 1 ounce of copper rolled out to an area of 1 square foot).

There are many different metals that can be made into sheet metal, such as aluminum, brass, copper, steel, tin, nickel and titanium. For decorative uses, important sheet metals include silver, gold, and platinum (platinum sheet metal is also utilized as a catalyst.)

Sheet metal is used for car bodies, airplane wings, medical tables, roofs for buildings (architecture) and many other applications. Sheet metal of iron and other materials with high magnetic permeability (electromagnetism)permeability, also known as Transformer Construction laminated steel cores, has applications in transformers and electric machines. Historically, an important use of sheet metal was in plate armor worn by cavalry, and sheet metal continues to have many decorative uses, including in horse tack. Sheet metal workers are also known as "tin bashers" (or "tin knockers"), a name derived from the hammering of panel seams when installing tin roofs.

In 2011, the sheet metal industry was almost $20.5 billion in the United States.

Usage of Structural steel steel as a building material is popular as a cost effective, quality material as compared to the alternatives. The three most common stainless steel grades available in sheet metal are 304, 316, and 410.

Grade 304 is the most common of the three grades. It offers good corrosion resistance while maintaining formability and weldability. Available brushed metal|finishes are #2B, #3, and #4. Grade 303 is not available in sheet form.

Grade 316 possesses more corrosion resistance and strength at elevated temperatures than 304. It is commonly used for pumps, valves, chemical equipment, and marine applications. Available finishes are #2B, #3, and #4.

Grade 410 is a heat treating heat treatable stainless steel, but it has a lower corrosion resistance than the other grades. It is commonly used in cutlery. The only available finish is dull.

Aluminium is also a popular metal used in sheet metal due to its flexibility, wide range of options, cost effectiveness, and other properties. The four most common aluminium grades available as sheet metal are 1100-H14, 3003-H14, 5052-H32, and 6061-T6.

Grade 1100-H14 is commercially pure aluminium, highly chemical and weather resistant. It is ductile enough for deep drawing and weldable, but has low strength. It is commonly used in chemical processing equipment, light reflectors, and jewelry.

Grade 3003-H14 is stronger than 1100, while maintaining the same formability and low cost. It is corrosion resistant and weldable. It is often used in Stamping stampings, Spinning and drawing parts, mail boxes, Cabinet, tanks, and Fan blades.

Grade 6061 aluminium alloy is a common heat-treated structural aluminium alloy. It is weldable, corrosion resistant, and stronger than 5052, but not as formable. It loses some of its strength when welded. It is used in modern aircraft structures.

Curling is a sheet metal forming process used to form the edges into a hollow ring. Curling can be performed to eliminate sharp edges and increase the moment of inertia near the curled end. Other parts are curled to perform their primary function, such as door hinges.

Decambering is the metalworking process of removing camber, or horizontal bend, from strip shaped materials. The material may be finite length sections or continuous coils. Decambering resembles flattening or levelling processes, but deforms the material edge (left or right) instead of the face (up or down) of the strip.

Drawing is a forming process in which the metal is stretched over a form. In deep drawing the depth of the part being made is more than half its diameter. Deep drawing is used for making automotive fuel tanks, kitchen sinks, two-piece aluminum cans, etc. Deep drawing is generally done in multiple steps called draw reductions. The greater the depth the more reductions are required. Deep drawing may also be accomplished with fewer reductions by heating the workpiece, for example in sink manufacture.

In many cases, material is rolled at the mill in both directions to aid in deep drawing. This leads to a more uniform grain structure which limits tearing and is referred to as "draw quality" material.

Expanding is a process of cutting or stamping slits in alternating pattern much like the stretcher bond in brickwork and then stretching the sheet open in accordion-like fashion. It is used in applications where air and water flow are desired as well as when light weight is desired at cost of a solid flat surface. A similar process is used in other materials such as paper to create a low cost packing paper with better supportive properties than flat paper alone.

Incremental sheet forming (or ISF) is a sheet metal forming technique where a sheet is formed into the final workpiece by a series of small incremental deformations. However, studies have shown that it can be applied to polymer and composite sheets too. Generally, the sheet is formed by a round tipped tool, typically 5 to 20mm in diameter. The tool, which can be attached to a CNC machine, a robot arm or similar, indents into the sheet by about 1 mm and follows a contour for the desired part. It then indents further and draws the next contour for the part into the sheet and continues to do this until the full part is formed. ISF can be divided into variants depending on the number of contact points between tool, sheet and die (in case there is any). The term Single Point Incremental Forming (SPIF) is used when the opposite side of the sheet is supported by a faceplate and Two Point Incremental Forming (TPIF) when a full or partial die is supports the sheet.

Ironing is a sheet metal forming process that uniformly thins the workpiece in a specific area. This is a very useful process when employed in combination with deep drawing to produce a uniform wall thickness part with greater height-to-diameter ratio. One example of ironing can be found in the manufacture of aluminum beverage cans, which are actually pressed from flat sheets of thicker material.

This is a form of Bending (metalworking) used to produce long, thin sheet metal parts. The machine that bends the metal is called a Brake press. The lower part of the press contains a V-shaped groove called the die. The upper part of the press contains a punch that presses the sheet metal down into the v-shaped die, causing it to bend. There are several techniques used, but the most common modern method is "air bending". Here, the die has a sharper angle than the required bend (typically 85 degrees for a 90 degree bend) and the upper tool is precisely controlled in its stroke to push the metal down the required amount to bend it through 90 degrees. Typically, a general purpose machine has an available bending force of around 25 tonnes per metre of length. The opening width of the lower die is typically 8 to 10 times the thickness of the metal to be bent (for example, 5 mm material could be bent in a 40 mm die). The inner radius of the bend formed in the metal is determined not by the radius of the upper tool, but by the lower die width. Typically, the inner radius is equal to 1/6 of the V-width used in the forming process.

The press usually has some sort of back gauge to position depth of the bend along the workpiece. The backgauge can be computer controlled to allow the operator to make a series of bends in a component to a high degree of accuracy. Simple machines control only the backstop, more advanced machines control the position and angle of the stop, its height and the position of the two reference pegs used to locate the material. The machine can also record the exact position and pressure required for each bending operation to allow the operator to achieve a perfect 90 degree bend across a variety of operations on the part.

Punching is performed by placing the sheet of metal stock between a punch and a die mounted in a press. The punch and die are made of hardened steel and are the same shape. The punch just barely fits into the die. The press pushes the punch against and into the die with enough force to cut a hole in the stock. In some cases the punch and die "nest" together to create a depression in the stock. In progressive stamping a coil of stock is fed into a long die/punch set with many stages. Multiple simple shaped holes may be produced in one stage, but complex holes are created in multiple stages. In the final stage, the part is punched free from the "web".

A typical CNC turret punch has a choice of up to 60 tools in a "turret" that can be rotated to bring any tool to the punching position. A simple shape (e.g., a square, circle, or hexagon) is cut directly from the sheet. A complex shape can be cut out by making many square or rounded cuts around the perimeter. A punch is less flexible than a laser for cutting compound shapes, but faster for repetitive shapes (for example, the grille of an air-conditioning unit). A CNC punch can achieve 600 strokes per minute.

A typical component (such as the side of a computer case) can be cut to high precision from a blank sheet in under 15 seconds by either a Machine press or a laser CNC machine.

A continuous bending operation for producing open profiles or welded tubes with long lengths or in large quantities. 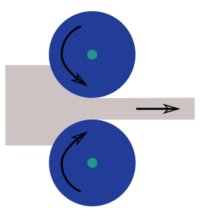 Stamping includes a variety of operations such as punching, blanking, embossing, bending, flanging, and coining; simple or complex shapes can be formed at high production rates; tooling and equipment costs can be high, but labor costs are low.