From EVOCD
Jump to: navigation, search

This page is under construction

Twin-like domains were observed in deformed magnesium by using electron backscatter diffraction. These domains do not satisfy any of the known twin orientation relationships, but have a high misorientation angle of 57 and a rotation axis of [10-10]. Fracture occurred primarily in these domains. {10-12} [10-1-1] twins were observed at the domain/matrix interfaces, and these twins may relax local stress and retard crack propagation. Trace analysis shows that the domains are likely on [10-11] planes. Interaction between the domains may lead to crack nucleation.

Samples (15x15x15 mm3) for compression tests were cut from a commercially pure, as-cast Mg ingot with a coarse grain size (2–3 mm). No specific orientation was selected before cutting. One side surface of the sample was mechanically polished with a series of sandpapers (down to 2400 grit number), then electropolished with Struers Electropol with an electrolyte solution (160 mg of sodium thiocyanate, 800 ml of ethanol, 80 ml of ethylene glycol monobutyl ether and 20 ml of distilled water). The sample was compressed to failure on an Instron 5882 testing system at a strain rate 0.5 s1 at room temperature. The polished surface was then examined with optical microscopy and scanning electron microscopy (SEM). Slip traces and patterns of cracks were recorded. Because the prepolished surface turned rough after deformation, EBSD could not be performed to generate meaningful data. To determine the nature of the slip traces, i.e. what slip systems produced the slip traces, as well as the orientations of the crystals, the prepolished surface was again polished mechanically and electrochemically, though only slightly. EBSD was then performed on the repolished surface.

Figure 1 shows an SEM micrograph of the polished surface after the compression test. The loading direction is marked by the long arrows, which are in the vertical direction. Two types of crack can be observed. Some of the cracks are almost parallel to the compressive load, whereas others propagate in an oblique direction that does not coincide with the direction of the maximum shear stress. In addition to the cracks, slip traces can be clearly observed. The vast majority of the slip traces run in the same direction, which makes an angle with the crack propagations. 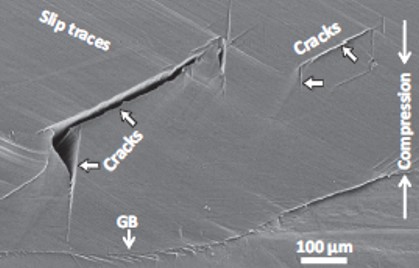 Figure 1. SEM micrograph of cracks (indicated by the block arrows) in a commercially pure, as-cast Mg sample after uniaxial compression. The compression direction is vertical, as indicated in the micrograph.Note that some of the cracks are nearly parallel to the compressive load. 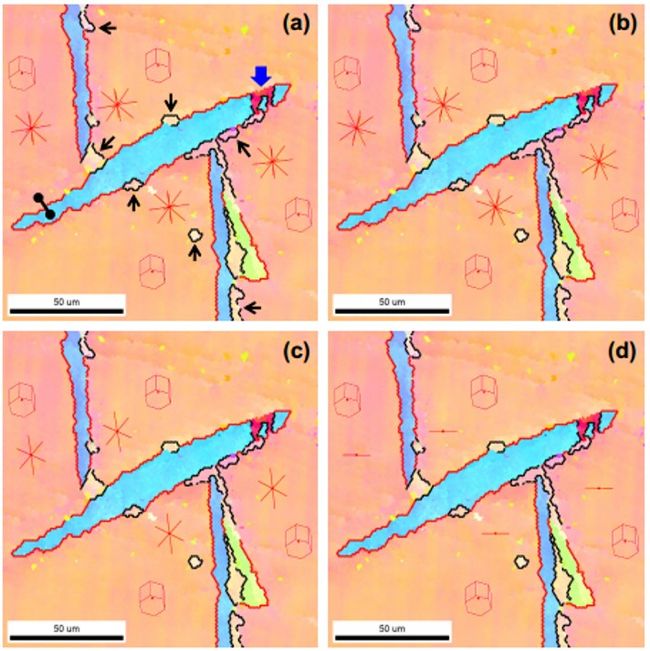 Figure 2. EBSD IPF maps of the fractured sample. High misorientation domains (in blue) are revealed. The bold red lines have a misorientation angle of 60 ± 10, but the rotation axis does not satisfy any of the known twinning modes in Mg, including double twins. The bold black lines are {10-12}[-1011] twin boundaries (86.3 ± 5 [1-210]). (a) The red stars are the traces of {11-22} pyramidal planes. Some of the {10-12} twins are indicated by the black arrows. Notably, most of the twins are nucleated at the domain boundaries. A pair of black points connected by a black line is also shown to demonstrate how the misorientation between the domain and the matrix is calculated. (b) The traces of {10-11} pyramidal planes. (c) The traces of {1-100} prismatic planes. (d) The traces of the {0001} basal plane.
Retrieved from "https://icme.hpc.msstate.edu/mediawiki/index.php?title=Twin-like_domains_and_fracture_in_deformed_magnesium&oldid=16677"